You are here: Home Retro Repair 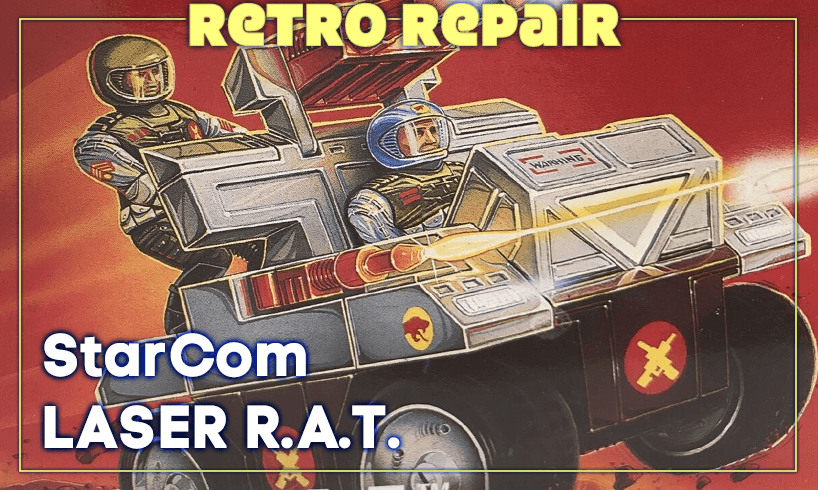 Recently I have begun (again) to collect Star Command toys, more commonly know as StarCom. A Coleco then Mattel toy line from 1987 features moving parts and transformations without the need for batteries. This of course makes the maximum age of these toys at over 33 years old. The main feature being battery-less movement was facilitated by clever spring and coil-motor designs they called this feature ‘power deploy’. As most of these toys are now three decades old you can imagine that there are not many still functional even if they survived child ownership.

I have purchased a few lots of StarCom toys and some have been in rough or ‘scrap’ like condition. I hope to use some of the rougher pieces to investigate how to repair, refit, and any refurbish options for my own collection. If this information can assist others as well so much the better!

So we begin with our first piece the StarCom Laser R.A.T. …

You will start with the underside. You can pull the wheels away from the body along the axle to get to the release tabs on the hubs.

Once you remove the fours phillips screws you can flip the piece over and carefully remove the two side rails, turret, and front guard. You will find the Motor ‘Type B’ under the left side side rail.

The front guard spring is wedged into the Main body but you can see how the Front Guard rests on the dips and the spring in order to spring up when activated.

The Turret is hard to disassemble without causing damage to the piece. The two pinholes on the backside of the Turret allow you to press on the front panel in order to dislodge and get access to the switch and spring assembly inside.

The Motor “Type B”

The Motor I am calling a ‘Type B’ is smaller than the motors found in other StarCom pieces like the Starmax Bomber or the Gun-turrets from the Starbase those I have called ‘Type A’. They however all are functionally the same in terms of operation differing only in size, color, and location of the wind-up activation and power delivery locations.

This is a disassembled ‘Type B’ motor which shows no coil spring, this motor didn’t have one which explains the partial deployment, as the turret spring helps start the deployment but the coiled spring is to provide the most effort here. The ratcheting/machine noise you hear from the pieces is from the ‘C’ gear located in each motor that winds against the gears. This piece is not necessary and I believe is removed on repair attempts which is why you have pieces that works but do not make any sound when they do so.

Another common issue I have encounter is with the Spring Gear, it has a spot for the coil spring to rest in so that the Axle & Gear when rotated will coil the spring and when the piece is ‘activated’ will uncoil providing power to the deployment whether moving a tray or starting some other motion. It seems the contact points break making the spring simply spin inside the motor never catching so never able to provide power on activation. In some cases the spring has simply slipped a bit and a bit of glue will help hold them in place, but if the gear is broken there is little to be done to fix the motor at that point.

This is the gear housing re-assembled after I opened the motor up. I labeled it per the parts list above and tried to take it so that you could see the layering of the gears. While the ‘Type B’ is smaller the gear usage and layout is the same as a ‘Type A’ from other pieces.

I found that the Turret piece seems to be almost irreparable without being very gentle and patient as the front plate appears to be tacked on with glue or some sealant. As this houses the activation switch for the piece it can be a major issue if the switch won’t slide and is ‘stuck’ in place. This unit I have tried adjusting the spring and loosening the Philips head on the Turret without much luck of it not sticking.

The motor not having a spring is a pretty big issue, it means that even if the activator did not stick the unit itself won’t actually deploy. The spring located at the bottom of the Turret does start the process giving the appearance of the piece deploying but then stopping. I have crafted a new spring out of a ‘Type A’ motor that was bent in the housing (possibly shoved back in on a repair attempt) as it is the same height for the ‘Type B’ although it may be too much coil and need further shortening to fit in the coil housing properly.

This particular piece also seems to have suffered submersion in water for some period of time as the all the metal plating has rust and the springs are also quite rusty. I haven’t considered using any rust remover on anything just yet but may use this piece for such an experiment in the future.

Overall I would say the Laser Rat is Possibly Repair-able depending on the actual condition of the piece. 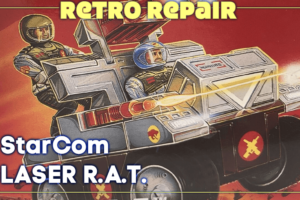